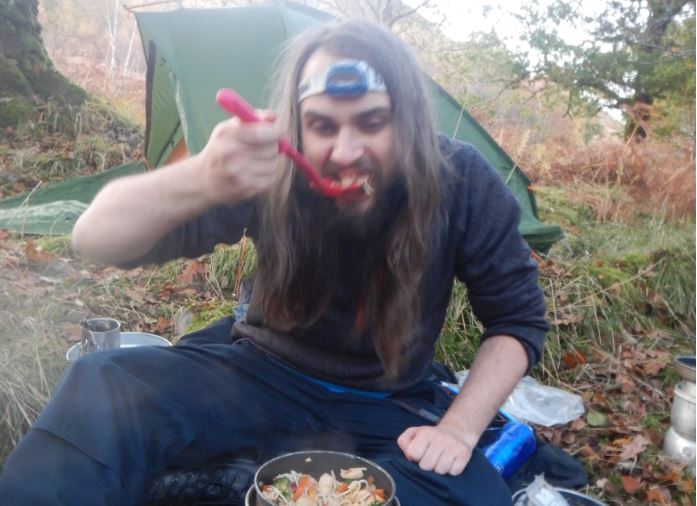 Robert had been living a chaotic lifestyle with very little structure before he came to Venture Scotland (VS). He completed the full VS programme in December 2019. Here’s his story…

“Before I was at VS I wasn’t in a great place in life. I’d spent the last several years without really doing anything with my life – a lot of the time I wasn’t doing anything at all, and when I was, I ended up just drifting from one thing to another without any real goals or structure.

A few years ago, I ended up moving back in with my parents, which wouldn’t have been great at the best of times, as my family have always been a total mess, but it made things even worse. Having to deal with my own issues as well as my family’s problems. I felt trapped and I ended up in denial just spending all my time drinking so I didn’t have to think about my problems or how to actually change anything in my life.

I was angry, depressed and isolated and just felt broken – until eventually I ended up having a total mental breakdown and trying to kill myself and ended up in the Royal Edinburgh Hospital. At this point I realised I had to make some sort of actual change in my life if I wanted things to improve. After a while of going through some mental health programs I was introduced to VS by my link worker and thought that it looked like something I should try out.

When I first started at VS, I didn’t really know what to think, on the one hand I was really optimistic that it was an opportunity to turn over a new leaf, but I was also really nervous about meeting new people. When you start the Challenge part of the course the first day you come in and introduce yourself then do some daft games – it seems stupid but it does end up making you actually talk to people and helps break the ice a bit. The second day is rock climbing which is a bit more serious, but also a lot of fun and helps you get to know people a bit more. After the two activity days, you go with the group to a bothy for a few days, which is intense but also pretty great.

In Discover, you get to know the group better get to do a lot of activities but also some more serious stuff like learning about mental health. My favourite moment was jumping off a rock into the North Sea (coasteering). It felt great to overcome my fear of heights, generally felt like I was overcoming my issues as a whole as well.

At the Discover bothy trip, we were away for five days at Glen Etive. This was a lot more intensive than first trip, not just fun and games but also having to confront more serious issues in some sessions. Although it can be tough revealing almost darker parts of yourself ends up making you feel like you are part of a family.

After Discover, things fall apart a bit – almost felt a bit triumphant, but it kind of led to a crash – end up out drinking etc. I realised that I don’t want to fall back into bad habits, that it wasn’t fair to those who are coming in and that I’m not giving myself the chance I need; I realised that I needed to apply what I was learning at VS to my life as a whole, rather than just turning up to distract myself from my life and then expecting my life to change by magic.

“Venture Scotland has helped me get from some of the absolute worst pits of despair to feeling like I’m a person again, like I’m an actual member of society.”

Even though I was falling back to old ways a bit, that realisation came at a pretty good time in a way though, as in the final stage of the course, leadership, the group has a lot more independence, and a lot more input into how the course is going to go. This is all leading up to the planning of two expeditions, that we planned as a group – so we had to learn how to do navigation and basic first aid and that sort of stuff. The first expedition is more of a practice for the final one and is more supervised. Unfortunately, I managed to hurt my leg, so we had to change the course to be shorter than we had originally intended, as we couldn’t cover the distance in the time we had. On the second expedition however the only issues we experienced were the bogs we kept sinking into.

All in all, through all the ups and downs, I’m very grateful that I had the opportunity to take part in the course. Aside from the various activities, Venture Scotland has helped me get from some of the absolute worst pits of despair what I have ever been in, to feeling like I’m a person again, like I’m an actual member of society. I think it would be great if other young people like myself got to experience stuff like this.”