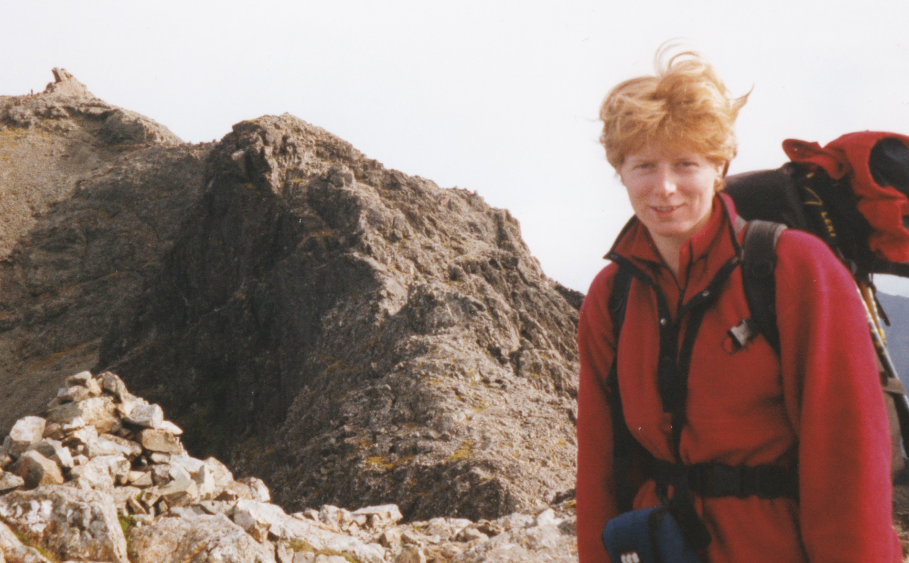 I was working as a health economist and economics lecturer at Queen Margaret University in the late 1990s.

Both myself and my husband Alastair were both keen outdoorsy people and because we were relatively new to Edinburgh, we wanted to do some volunteering and work with some folk who didn’t get to do that sort of thing.

I really loved doing the trips up to Glen Etive with the young people, listening to them talk about their lives and also the other volunteers and the things they did.  (Then I later got involved with the management committee.)

At the same time my dad died of cancer. He was only 56, way too young as far as I was concerned.  He left us a speech at his funeral, which basically said ‘do what you love’. ‘I wasted my life working, I missed you kids growing up, I didn’t get to do all the things I wanted to do. I worked really hard thinking I was going to have a big retirement and do all those things then. So don’t do a job you don’t like, or waste your life doing stuff you don’t love’.

So that made me reconsider my own life. At the time there were some other volunteers who had gone travelling, who had gone off to Nepal, who had changed direction or retrained and were now doing a different job. And listening to some of the young folk, who never got the chance to do things they wanted to do, (but in a way had a certain type of freedom because they were not under those constraints??), it all made me think ‘you should do stuff you are happy doing’.

Both Al and I were working in academia. I had just been offered a permanent contract and he was on short-term contracts. But we both said ‘let’s just stop this and go travelling’. So we went trekking in Nepal and India in the Himalayas, and I spent quite a lot of time drawing and documenting our journey. I realised that is what I really loved doing.

I had come across some of that when I was on the VS management committee and we were doing a team building exercise. I suddenly discovered that what I

loved doing was coming up with ideas and drawing things. I then started doing some evening classes, and then (when I came back from travelling) I got into art college (the Leith School of Art) and then went to Edinburgh Art College and did my degree and then got a sponsored place to do a Masters. Now I paint and teach and run my own business, selling my art products. My ethos is bringing art and nature into your home.  (I try to use recycled and recyclable materials, keeping things local…)

Being involved with Venture Scotland opens you up to lots of different folk and different opportunities. In the same way VS does that with young people, it does it for volunteers too.  As a volunteer you go through the same psychological process and team building. Because you do it again and again, with different groups, you see how it works differently with different people, and then you start to think, ‘OK, that is what I like’, or ‘I don’t like that, I can understand why they don’t want to do that’.  It makes you much more aware of the way you can live, and the way things can be done.  When you look at what some of the young people have to put up with in their lives, you think ‘I should make my own life better, because I can’.

I remember some of those walks into Glen Etive with a group for the first time, and realising how different that is for some young people. I remember one girl who brought her hair straighteners with her. Then there was one lad who had brought a knife with them because he was really worried other people were going to stab him in the night.

Photos from a Venture Scotland trip to Skye in 1998 supplied by Sandra.