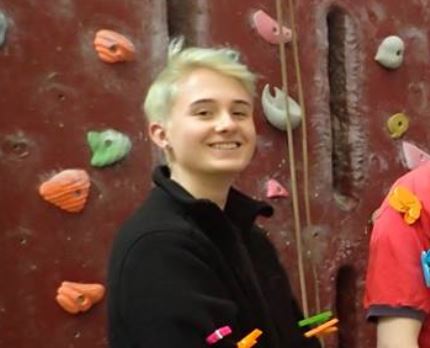 Jo was stuck in a cycle of self-destruction before she was referred to Venture Scotland. She completed the full programme in 2019. Here is her inspirational story…

I knew there was something a bit different about me compared to my peers, but I couldn’t put it into words. My early life was turbulent and although I appeared to be coping for most of my childhood, inside I was hurting.

I was picked on at school, I was quiet and felt incredibly isolated. I clung to my academic abilities to give me purpose and identity, but through my teenage years I struggled to find any stability.

At 12 my mental health began to deteriorate, and my life spiralled out of control. The years that followed were plagued by crippling anxiety, eating disorders, self-harm, psychosis and, eventually, suicide attempts.

I had to stop attending school and was hospitalised for my eating disorder, when I was forcibly tube-fed. I could no longer rely on academia to distract me and this only exacerbated the emptiness. I lived my life constantly expecting to end up in crisis. That was what I knew and had grown comfortable with, and those around me had come to expect.

I spent many years in and out of psychiatric hospitals, lost in the monotony and scary reality of hospital life. I became socially isolated, lost a lot of friends and felt I had no identity.

My future looked bleak. It was hard to envisage one. There was too much of my past that I couldn’t process, pulling me backwards. I felt it defined me; I couldn’t escape from it. I couldn’t hold down a job or be in education for more than a couple of months. I didn’t know how to break the perpetual cycle of self-destruction.

In April 2018 my CPN (community psychiatric nurse) told me about Venture Scotland. She thought it could help me move in a different direction and regain some independence. It sounded incredible, but the prospect of change was, frankly, terrifying. But I took the pivotal first step and allowed my occupational therapist to refer me. It turned out to be the best decision of my life.

From my very first meeting with Noush, one of the outdoor youth workers, I began to feel a little hopeful. This hope only grew as more time passed.

Venture Scotland provided me with a safe space that was invaluable, a place devoid of judgement. I felt free to be myself unapologetically and let my guard down.

The course allowed me to experience the outdoors in a way I simply wouldn’t have been able to otherwise. It rekindled a love of nature within me.

The Glen Etive bothy, where we went for three-day and five-day trips, was a place of refuge for me. I can call on the memory of it to soothe myself in difficult times. It’s somewhere I felt liberated from the stresses of daily life in the city and gave me the head space to start working on myself.

Over the course of 10 months, I met some incredible people who had similar experiences to me – people who I felt genuinely understood me and who I could laugh with until my stomach hurt. It was a pleasure to watch them grow with me and I couldn’t imagine a better group to have shared the experience with.

One of the most valuable things I’ve gained is confidence. I no longer feel like my voice isn’t worthy of being heard and I have more self-compassion.

At the end of 2018 I was diagnosed with autism spectrum disorder, which was quite a major thing to come to terms with, having gone so long without knowing why my brain works the way it does.

I don’t know how I would have processed this revelation without having people around me who treated me the same, regardless of labels. They helped me recognise that while having a diagnosis sheds light on why I’ve always felt different, it doesn’t change who I am.

VS has been a source of unwavering support and stability and I can’t begin to express what a massive difference this has made to my life.

They helped me through a rough spot in January and enabled me to cope. I now see myself from a new perspective and have a great deal more insight into my life, and why I spent so long in the same cycle. Although I still struggle, I feel much better equipped to tackle the arduous times ahead.

VS also helped me to a place where I felt able to apply to university, something I wanted to do for years but never felt I could manage until recently.

If someone had told me this time last year, I would have a place at university and a life I feel is genuinely worth living, I would have laughed. But here I am.